There were mistakes in the transcription, so I've corrected them. Iran's Press TV, 1/22/13: 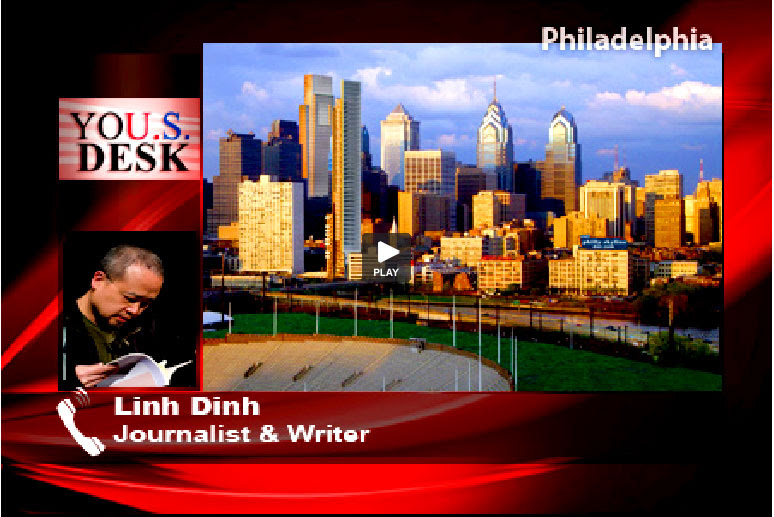 “In his inaugural speech, Obama said a decade of war is now ending and that the U.S. will walk to resolve future crises peacefully, but that is all rhetoric,” author and activist Linh Dinh told Press TV’s U.S. Desk on Tuesday.

“Because Obama is starting new wars, you know his attack on Libya and the hell that he is creating in Syria, is entirely instigated by the United States, and he’s now provoking China.” he added. “The Prime Minister of Japan is visiting Washington DC next month, and this man is quite literally a nutcase. He is a very dangerous man. He denies that Japanese troops committed atrocities during World War II. He denies there were comfort women, that is, sex slaves, Korean sex slaves, during World War II, so he is the new Japanese prime minister, and he is an ally in the US provocation of China, so that’s another crisis that the US is starting, and why is the US doing that? It’s because the US thrives in the war business. That’s the only business it has left.”

After taking his second inaugural oath of office in front of the Capitol building on Monday, Obama declared misleadingly that “a decade of war is now ending,” while pledging to maintain America’s superpower status through a global military presence.

“America will remain the anchor of strong alliances in every corner of the globe; and we will renew those institutions that extend our capacity to manage crisis abroad, for no one has a greater stake in a peaceful world than its most powerful nation,” Obama said in his speech.

I love your articles which I mostly read on Counterpunch. You are a terrific writer and my husband and I want to encourage you in all of your endeavors - photographic, written and spoken.