Cambodians in Stockton, California in 2021:

Cambodians in Trà Vinh, Vietnam in 2017: 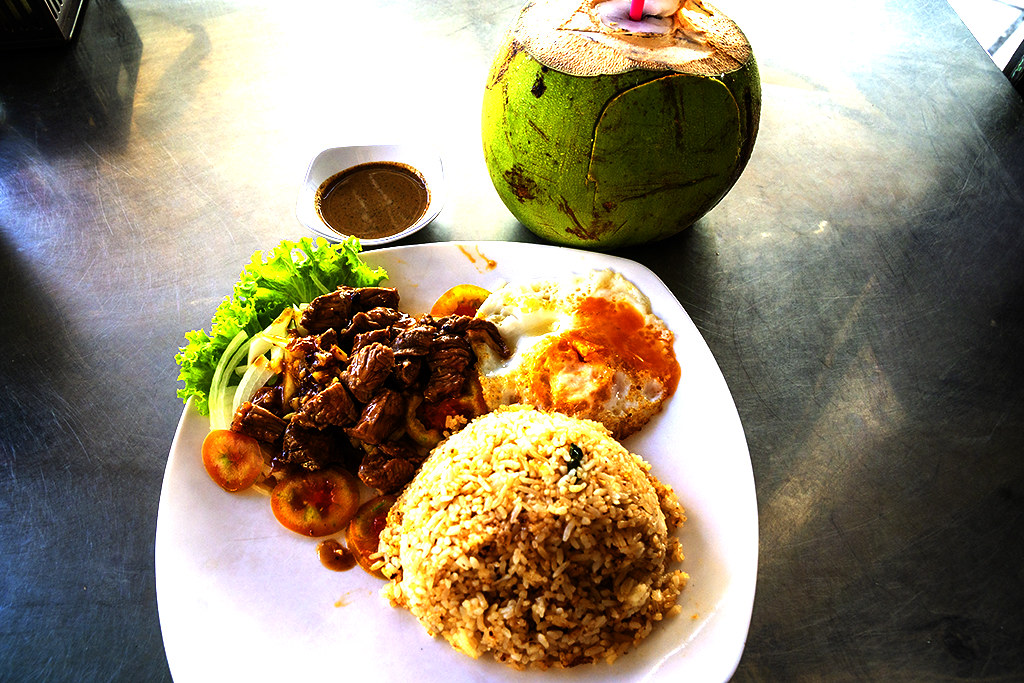 Tonight's dinner at ChanReash 10 Makara. $4 for fried rice with beef cubes and egg. $1 for the coconut, and I ended up drinking two. 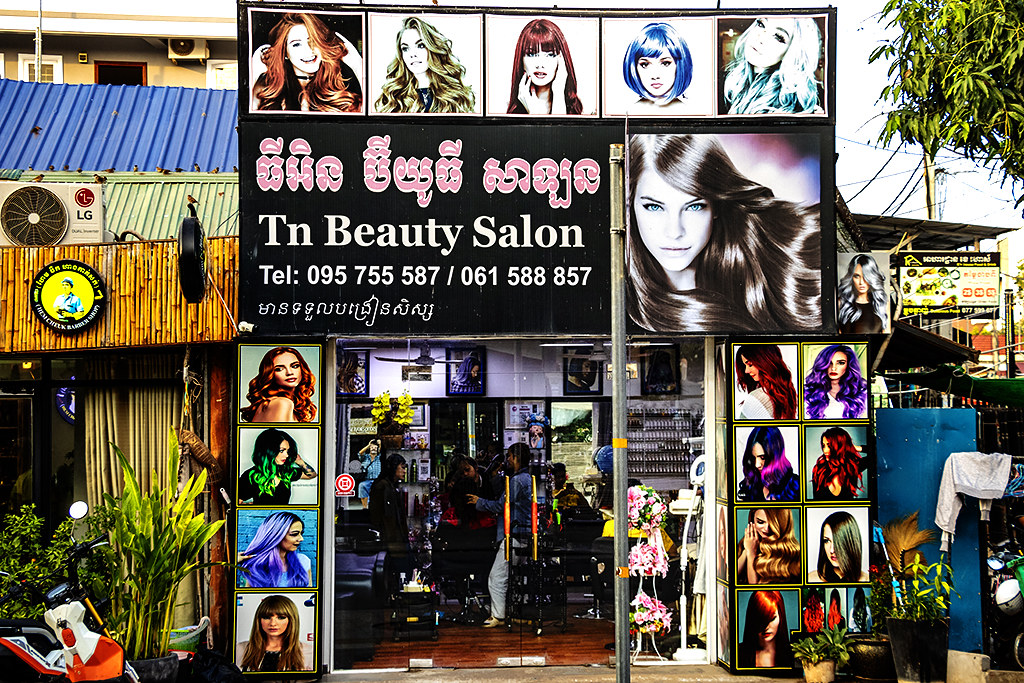 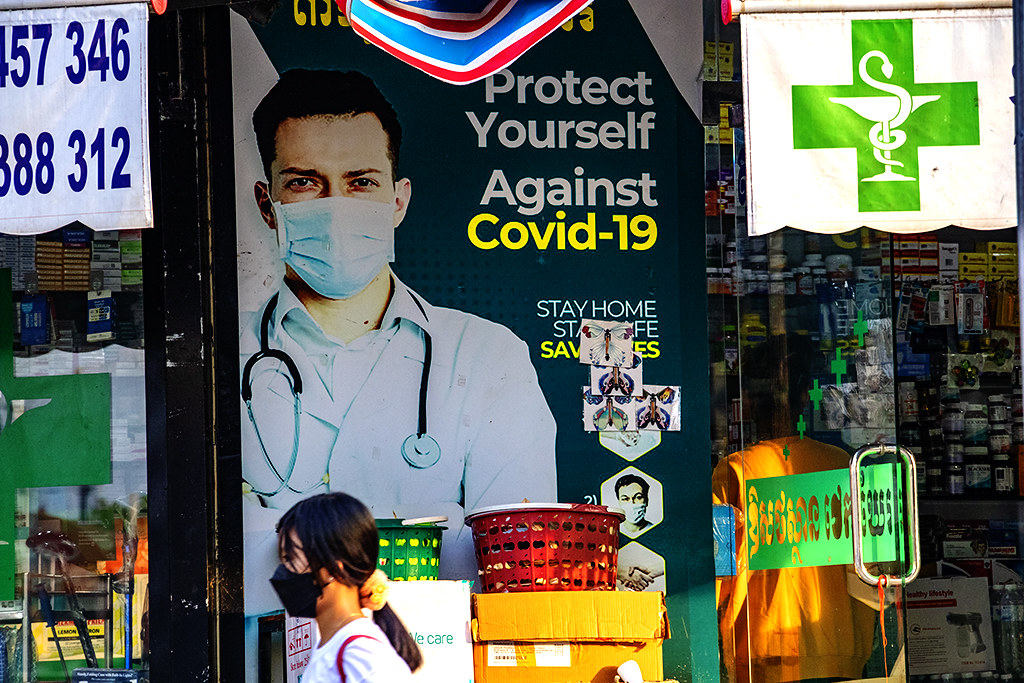 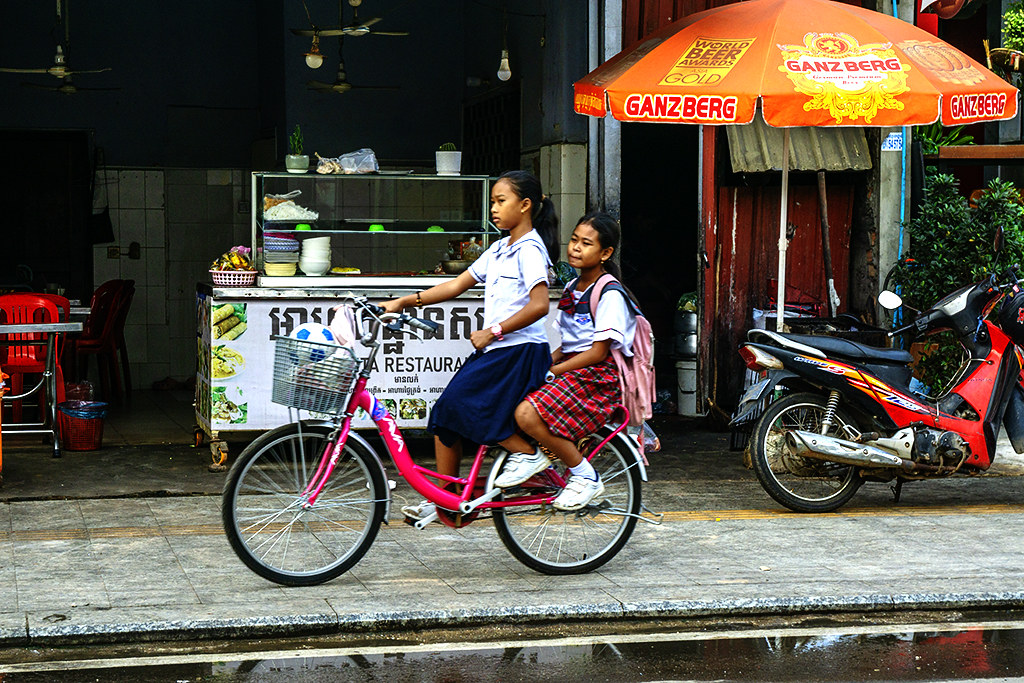 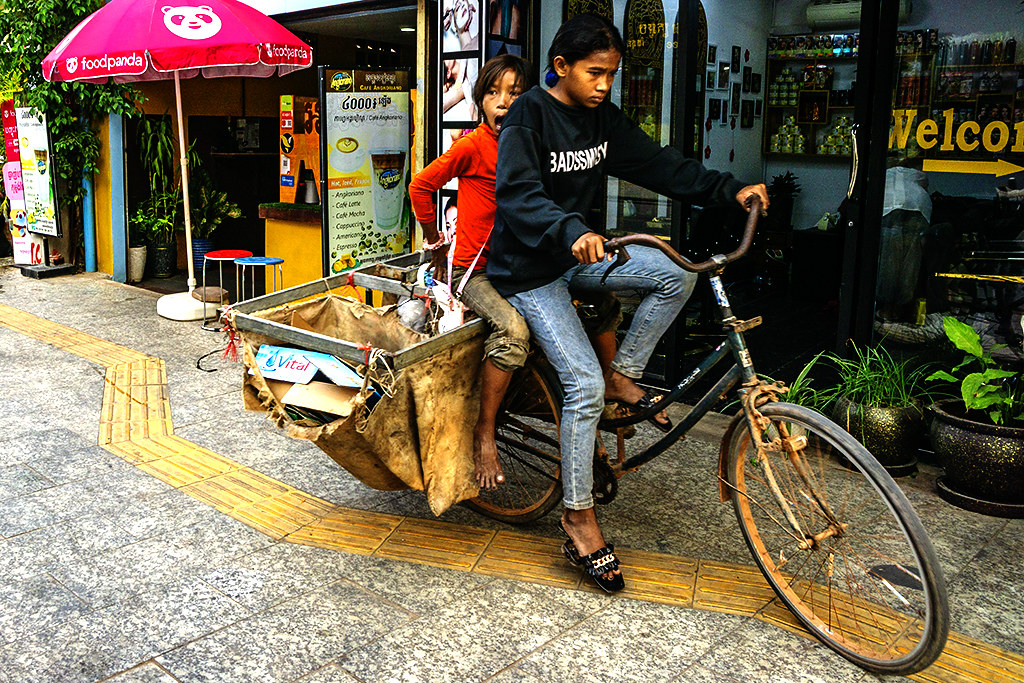 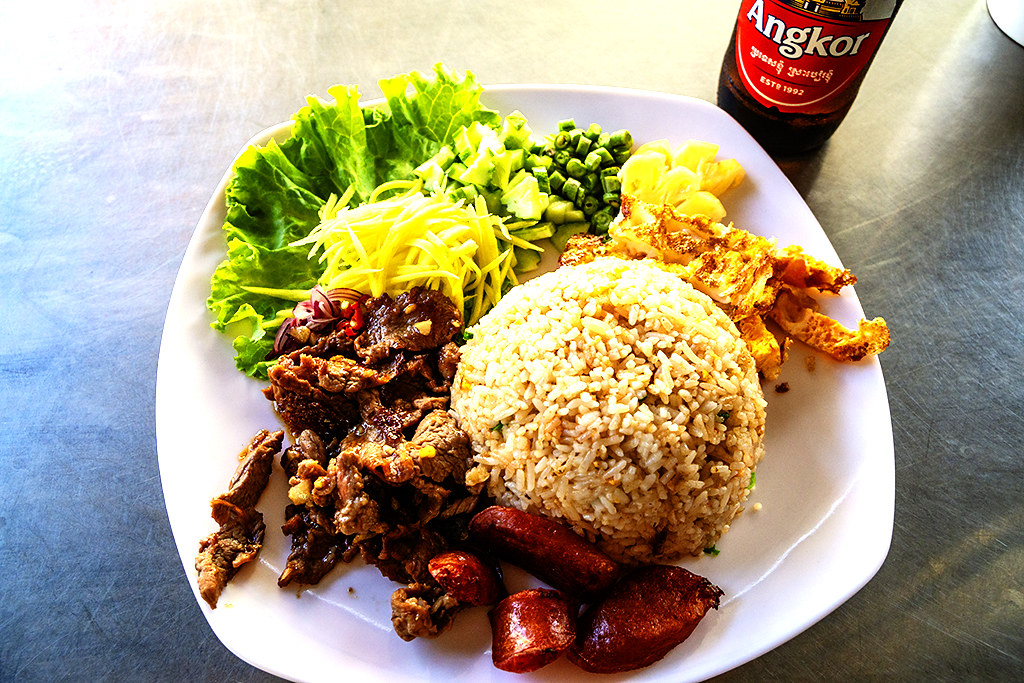 Fried rice with beef, Chinese sausage and egg, an excellent $4 dinner at ChanReash 10 Makara. Chunks of pineapple were a nice touch. Bottle of beer cost $1.50 extra. 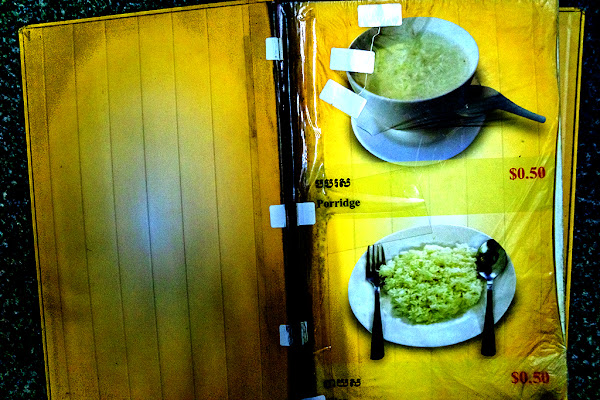 When Princess Bajrakitiyabha collapsed last December, I was in Chennai, India. Returning to Thailand two weeks later, I expected news of her death to dominate conversations. The palace never admitted she had died, however, but was just in a coma, and Thais were urged to pray for her recovery. Everywhere across the kingdom, shrines with her portrait have mushroomed. You can even find them at schools and shopping malls.

As of 2/6/23, the princess is supposedly still alive, though unconscious, and if you’re inside Thailand, it’s literally a crime to challenge or question the king, so she isn’t dead until he says so.

Tyrants don’t just control lives, but information, and here, I’m also talking about the entire West, of course. When a Pfizer employee was recently taped boasting about Jewjabbing crimes, YouTube deleted the evidence, “This video has been removed for violating YouTube’s Terms of Service.”

With so much pushback against Covid lies from the Jewjacked media, YouTube disabled its dislike button 16 months ago. YouTube’s CEO, Susan Wojcicki, is Jewish. Did I just commit a hate crime? Is Jewish a hateful word?

It is, apparently. After I listed many powerful Jews behind the Jewjab genocide, Blogger/Google deleted my post, with this explanation:

Your content has violated our Hate Speech policy. Please visit our Community Guidelines page linked in this email to learn more.

We encourage you to review the full content of your blog posts to make sure they are in line with our standards as additional violations could result in termination of your blog.

It’s OK to mass murder millions, like Jewish Albert Bourla, but it’s hate speech to name the culprits. Aren’t you nauseated to live in such a sick world, but that’s the New Normal, eh.

Though Klaus Schwab wrote Covid 19: The Great Reset, most people still dismiss it as a conspiracy theory. Ron Unz, for example, pays no attention to this sinister agenda. Instead, he still drones on about how Jewjabs are unquestionably safe and effective.

Am I glad to be as far away as possible from the nuthouse that’s the United States of America!

Here in Siem Reap, I’m surrounded by sane people going about their daily business. I often hear laughter and see children play. Most faces are maskless. Having experienced a horrible great reset not that long ago, Cambodians just want to be left alone.

In his Pol Pot, Philip Short sums up what they were subjected to, “Money, law courts, newspapers, the postal system and foreign telecommunications — even the concept of the city — were all simply abolished. Individual rights were not curtailed in favour of the collective, but extinguished altogether. Individual creativity, initiative, originality were condemned per se. Individual consciousness was systematically demolished.”

To enforce such a radical regiment, many woke fanatics were enlisted to punish, torture or kill those who failed to obey. Leaders of the Khmer Rouge were Paris educated intellectuals, however, so it was a foreign ideology triggered that genocide.

Beware of know-it-alls who are righteously convinced they know what’s best for you, though some are just motivated by hatred or a twisted need for revenge.

Here in Siem Reap, I’ve been feasting on blood. Morning, I might be at Taste of Khmer Soup to have their boat noodles, a Thai dish with a dark broth enriched with cow blood. Evening, I’m likely at Li La, to have their rice gruel with chitterlings, pig maw, pig’s trotter and pig blood curd. It’s not kosher, of course, and illegal even in Chinese majority Singapore, for they’ve lost their way, but I’m in Cambodia.

Last night at Li La, four white people hesitated then walked in. A disaster, I thought, and sure enough, they got up after studying the yellowed menu that’s patched with white and clear tapes. “I’m sorry,” a middle-aged white woman said as she stroked the waitress’ arm.

Though there are familiar stir fried dishes like cashew chicken, they’re tucked at the back. At the front are frightful sounding entries like “Cooked with intestine, Stomach (Big)” and “Sausaga (Big).” The latter is illustrated by a dark photo of four curving phalluses, or fossilized turds, chopped up. With your meat or blood, you can order a 50 cent portion of rice gruel or steamed rice.

Rhyming with cruel, rice gruel is so much more evocative than porridge, a pussified word suitable only for babies. Can I have more porridge, mommy?

Speaking of moms, I returned to Siem Reap with dark, free flowing fantasies of eating often at Best Mom, but since I couldn’t book a room near it, I’ve only been there twice.

At Best Mom, I was happy to meet again Max, whom I wrote about a while back. A font of embellished tales, he’s always great for a conversation. This time, he told me about the Russian gangsters who used to frequent Mikey’s. Their main business was white slavery, so little Susan from Illinois, say, could certainly disappear from a Siem Reap sidewalk, only to end up as a penetrable footstool in Dubai.

“If you already have a garage filled with Lamborghinis, Ferraris, Bentleys and Aston Martins, what more do you want? A white slave, of course.”

As a proof of this trade, Max cited the case of Johnny Gosch, from his home state of Iowa. Four decades later, Gosch reappeared, said Max, except he didn’t want to go home, for he had gotten used to a comfortable life in Arabia. This didn’t happen, of course. Like millions of American children, Gosch is still missing. Powerful American pedophiles always need more boys and girls. After you’ve robbed or bombed millions of innocents, what more do you want?

Struggling to explain the unspeakable crimes of the Khmer Rouge, Short brings up, rather oddly, the case of Tat Marina. A “stunningly beautiful young actress,” she was the mistress of a government minister, Svay Sittha, so Sittha’s wife retaliated by staging an acid attack on Marina.

Short, “The parallel with Khmer Rouge atrocities is striking. One way to try to understand why the Cambodian communists acted as they did is to enter into the mind of a well-educated, intelligent woman, who exacts vengeance by pouring acid over a young girl’s head, watching as it eats away her body and every hope of happiness in her life. What can be more odious than to destroy a child’s future? The Khmers Rouges, at least, could argue that they were acting for a cause, not out of personal evil.”

An even more famous case was the murder of Pisith Pilika, a mistress of Hun Sen, the leader of Cambodia since 1985. As with the attack on Marina and many others, no one has been punished. The most powerful Cambodians are free from prosecution, it seems, but that’s true of many, if not most, countries on earth, including Western “democracies.” Typing that, I laughed so hard, I almost burped up pig’s or cow’s blood. They taste about the same.

Since history is generally bad news, it’s best to stay clear of historical figures. Sell enough rice gruel with blood curd, so you can buy something else to eat, and hope your children don’t become orphans by dusk.

In 2018, I took a bus from Saigon to Phnom Penh. Just outside Wat Ounalom, I ordered a can of Angkor from a 12-year-old waitress. Eager to practice her English, she chattered away. I hope she’s doing fine, this clearly bright girl.

A few days ago at Best Mom, another girl of roughly the same age was cleaning the plastic covered menus. That’s her chore, then she brought me a can of Angkor. Proud of her own competence, she briskly performed each task, and when I left, she gave me the brightest smile.

Shouting towards the back, I said to her mom in the kitchen, “Bye, mom! I’ll see you later!”

If only such normality could reign everywhere, all the time. 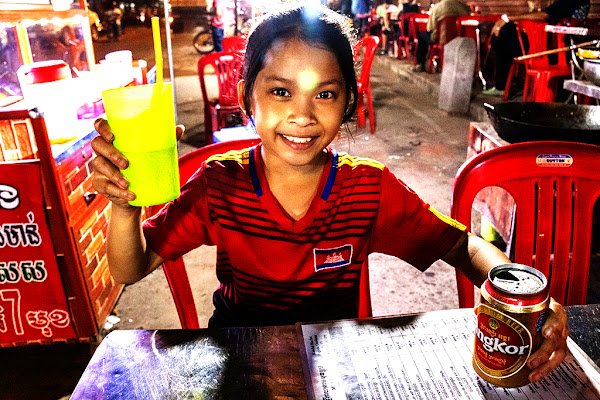 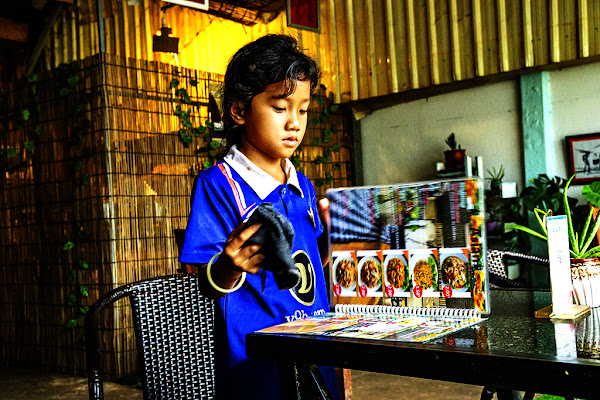