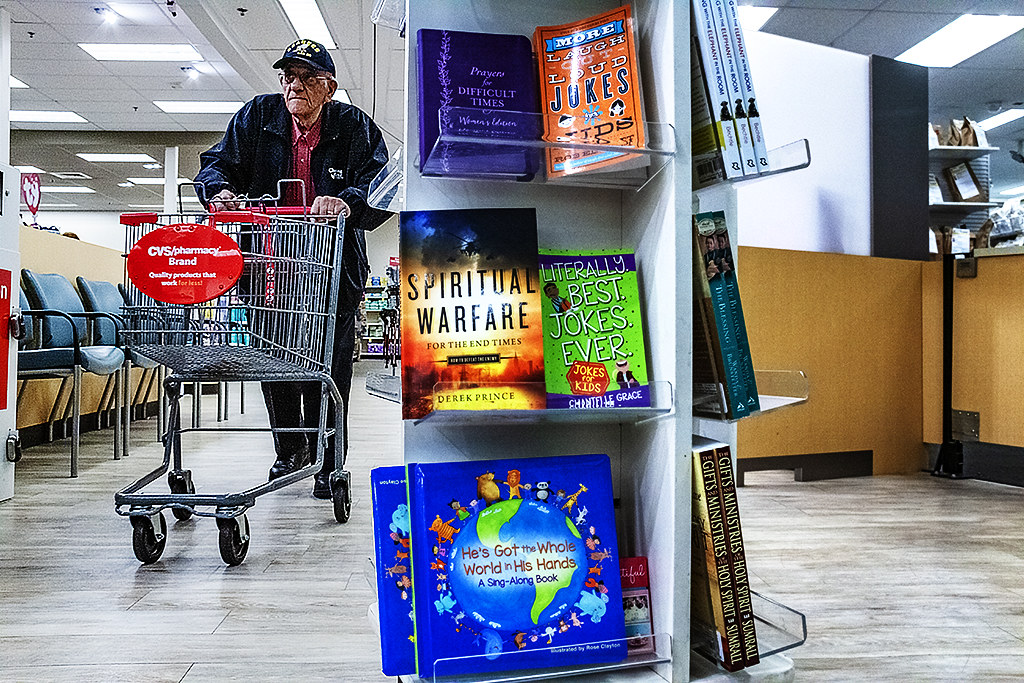 SPIRITUAL WARFARE FOR THE END TIMES' back cover:

How to Overcome the Evil of These Dark Days

As the time approaches for Jesus' return, the spiritual battle between good and evil is heating up. Evidence is all around: corruption, shootings, genocide, civil wars, false prophets, increased persecution. The enemy is on the move.

Yet God is on the move, too, in powerful ways--and we can join Him in His work. The Bible says that we overcome evil with good. With piercing insight and practical application, Derek Prince will help you understand not only the intensified warfare environment in which we live, but also how you can help unleash God's goodness in the world. You'll learn how to re-equip and wield the weapons God has given you and how to walk in your authority in Jesus Christ.

For "we do not wrestle against flesh and blood, but against principalities, against powers, against the rulers of the darkness of this age, against spiritual hosts of wickedness in the heavenly places." It's time to stand up and fight, to bring hope and light to these turbulent days and join Jesus in the triumph of good over evil.

This is a Christian Zionist classic stating that the West has to be prepared to fight a bloody war in the Holy Land to prepare for the coming of Christ. However, the author opposes the view that Christianity has made Judaism obsolete and Israeli Jews would have to be converted upon Jesus' arrival or condemned to damnation. This is sold in a self help and spiritual rack in CVS and the distributor also supplies Walmart. There are no other historical or political books (other than young adult bios) on this rack from Choice Books.

"Prince, who taught on many themes and subjects including the foundational truths of the Bible, was probably most noted for his teachings about demons, deliverance ministry, and Israel.[16] He strongly opposed replacement theology. His book The Destiny of Israel and the Church argues that the Church has not replaced Israel and that the covenant that God made with the nation of Israel still stands today. Prince also believed that the creation of the state of Israel was the fulfillment of biblical prophecy. Derek states in his book Promised Land, "The central theme of biblical prophecy, as it is being unfolded in our time, revolves around the land and the people of Israel. God is carrying out His predetermined plan to regather the Jewish people from their worldwide dispersion and restore them to their ancient homeland." (Wikipedia)

Choice books gets a good review from the Washington Post:

Simon Schrock recalls visiting Dulles International Airport with his daughter many years ago and being shocked to see Playboy magazines sold at one of its newsstands.

So Schrock got involved. In 1968, the journeyman carpenter and part-time Anabaptist preacher persuaded a newsstand at National Airport to add 10 Christian titles to its racks. By the 1970s, he was selling 600 books every two weeks, he said.
ad_icon

By the 1980s, he'd helped found Choice Books, a Harrisonburg, Va.-based company that describes itself as a distributor of "inspirational, wholesome and family-oriented reading materials." Today, with eight offices stretching from the Great Lakes to the Gulf states and Northern Virginia, the company sells about 8,000 books a day, Schrock said - more than 5 million books a year through more than 10,000 kiosks at highway rest stops, drugstores, department stores and airports.

"Our drive is to offer the choice that will help people through their problems," said Schrock, who quit carpentry around 1975 to sell books full time. "I decided rather than fight against what you don't like, just offer an alternative."

But for folks who come across Choice Books at the New Jersey Turnpike's Woodrow Wilson service area or Wal-Mart - places where they're more likely thinking about gas prices than God - Schrock's alternative surprises. Choice Books is betting that the Bible proves as tempting to roadside shoppers as People magazine.

"Our activity is driven by the impulse purchase," says John Bomberger, chief executive of Choice Books.

Bomberger was attending Eastern Mennonite Seminary in Harrisonburg when he became interested in "blending business with wholesome reading materials." He joined Choice Books in 1993.

"People see a title - a felt need they might be wrestling with," Bomberger said. "It catches their attention. It's not in the level of chewing gum or Life Savers."

The distributor doesn't wade deeply into ecumenical theory or divisive evangelical politics. Some titles aren't even explicitly Christian. At a CVS on Vermont Avenue NW just south of Thomas Circle in the District, a Choice kiosk carries "Becoming Your Spouse's Better Half: Why Differences Make a Marriage Great" and "30 Days to Taming Your Tongue: What You Say (and Don't Say) Will Improve Your Relationships." Choice is less about pointing fingers at philistines than about, well, emulating Dr. Phil.

"These books try to give encouragement," Schrock said.

Although he's the author of eight books himself - including "What Shall the Redeemed Wear?," which holds that "Unisex fashion, garments, or hairstyles are outside the will of God" - and once had a letter to the editor on the importance of prayer in school published in the Washington Times, Schrock generally only weighs in on controversial issues when pressed. Politics aren't a preferred conversation topic. "I see my calling as higher than being a congressman or a senator," he said.

But if Schrock is reluctant to proselytize, plenty of authors aren't - and plenty of people are buying their books. Mark Kuyper, president of the Evangelical Christian Publishers Association, said Christian reading material represents about 10 percent of the total book market, worth about $2.5 billion a year. Some Choice titles sell more than 50,000 copies a year at $8 to $14 a book, and obtaining access to big chains has been a boon for the company.

"One of the great challenges Christian publishing has faced over the years is getting rack distribution in a variety of general-market-type outlets," Kuyper said. "Years and years ago, Christian books were almost relegated to Christian stores. Now we have titles that sell a million-plus units. That exposure and availability through grocery stores has been fundamental to that growth."

Schrock, however, isn't interested in quarterly financials. He'd prefer to talk about his recent lymphoma struggles memorialized in his blog (simon.fcf-web.org), or how his Anabaptist ancestors split with other Protestants in 1525 over the baptism of babies. (Anabaptists believe children should not be baptized until they are of age to understand its meaning.) Or his son Ivan, who's a preacher at his church and a Choice Books employee.

Whether anyone buys his books isn't really important. For a Christian, he's quite Zen.

"You are a man who goes into CVS," Schrock said. "You have a choice to buy a lot of stuff. In one little corner, you have good, original books. If you don't want those, walk on."

God's purpose, however, goes beyond restoring and reestablishing Israel as a nation in her own land. God will ultimately make them the instrument of His judgment on the other nations. In Jeremiah 51:20-23, God is speaking to Israel, and He says:

Further, in Isaiah 60:12, God assures Israel of a place of preeminence among the nations:

For the nation and kingdom which will not serve you [Israel] shall perish, and those nations shall be utterly ruined.

Nations that oppose God's purposes for Israel are responsible for the judgment which they will bring upon themselves. No matter how strong or prosperous those nations may appear, they will have no permanent place in history. They are on their way out.

These promises are given to Israel not on the basis of their own merits, but to honor the redemptive work of the Messiah Jesus, and because He has made Israel His people. "And it shall come to pass that just as you were a curse among the nations, O house of Judah and house of Israel, so I will save you, and you shall be a blessing…" (Zechariah 8:13).

"The Portion of Jacob is not like them [the Gentile nations], for He [the Lord] is the Maker of all things, and Israel is the tribe of His inheritance (Jeremiah 10:16).

Scripture looks forward to a day when: "Ten men from every language of the nations shall grasp the sleeve of a Jewish man, saying, "Let us go with you, for we have heard that God is with you"'" (Zechariah 8:32).