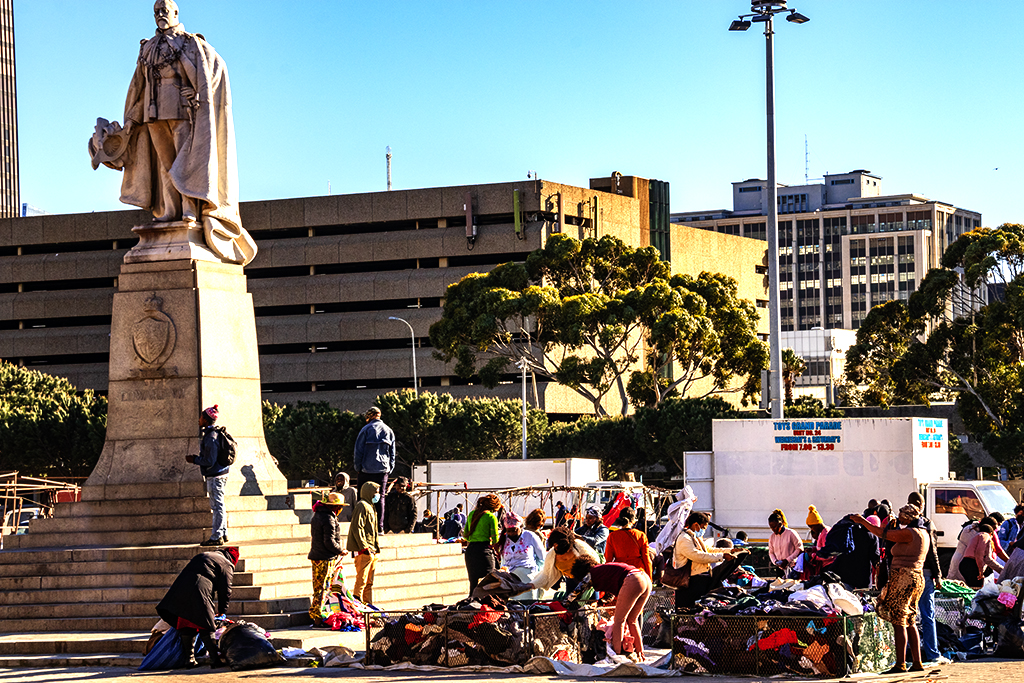 People buying used clothing from steel bins in Grand Parade, the heart of Cape Town. Facing City Hall, Grand Parade has turned into a third world bazaar. In Kiev, I also saw people rummaging through mounds of used clothing, but not in the center of town.

From my apartment to Grand Parade is 1.4 mile. After walking here this morning, I took a taxi van to Salt River, two miles away, then walked back to take photos. Not even half a mile from Grand Parade, I saw a darkened strip of very crude dwellings, inhabited by the homeless, so crossed the street. Just 15 minutes later, however, I was almost mugged at the Grand Parade itself!

As one guy blocked my forward progress, two guys stood behind me, but I didn't see any gun, knife or even screw driver, so I gave them nothing. Looking behind the guy in front of me, I shouted, "Police!" to make him think there was a cop behind him. Hearing this, a woman also shouted, so they ran away.

Grabbing my camera bag, one guy had torn one end of the strap, but that was the only damage. Nothing had been taken.

The lady actually said, "You should thank me. I screamed!"

I just smiled at her. I was still too digusted.

With so many people around, Grand Parade provides many opportunities for grabbing cellphones, but a mugging?! Texting about this incident to a Captonian friend, I said I wasn't about to give the Angry White Pussies the pleasure of seeing me dead!

Whatever. This Sunday, I'm going to Kayelitsha, a vast black township that's reputed to be the worst section of Cape Town. I have a plan. If you don't see photos on Monday, it will mean my plan didn't work! I should be fine. I have a plan. It would be negligence on my part to leave Cape Town without seeing Kayelitsha.

Please be extremely careful, especially in the townships. All's it takes is a split-second for a punk to puncture your liver - and then what?! Always watch your ass and trust your gut: Immediately leave if you get a bad vibe, hopefully you'll have time. Never forget: SA is the Murder Capital of the world.

If I were you I wouldn't go to those townships, the same place where they used to "necklace" people for kicks. I think you're pushing your luck, I sure hope it holds, that your "plan" works.

Looking forward to Monday's post, and that these coming photos were worth the risk.