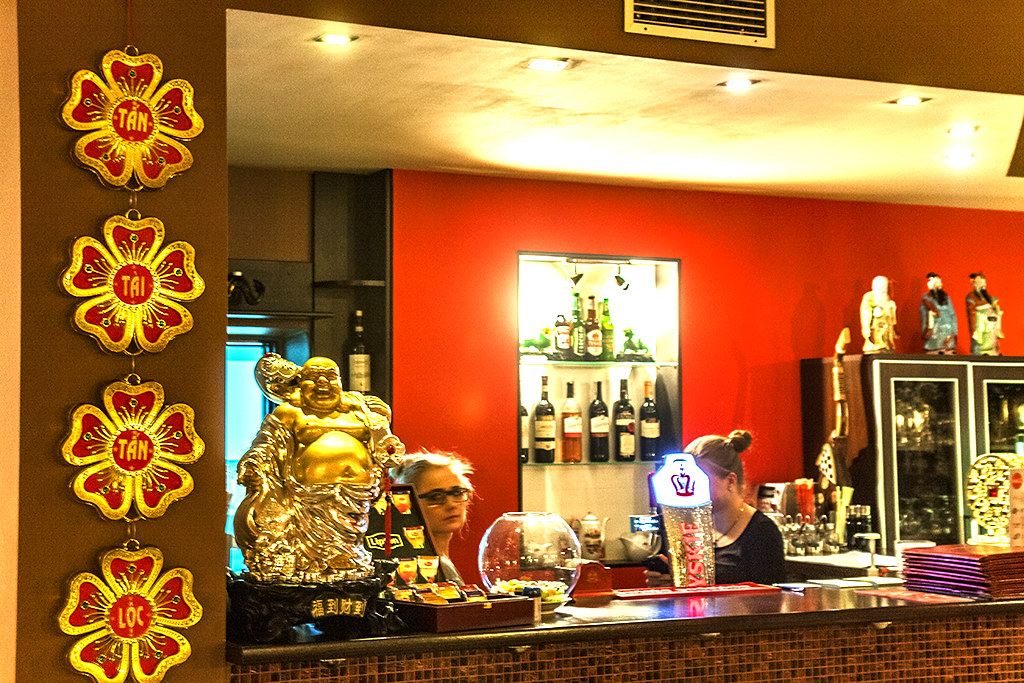 Bar Orientalny Restauracja. Owner is one of only two Vietnamese in town. Has lived in Europe for 30 years, with the first three in Czech Republic, where he met his first Polish wife. Followed her back to Zgorzelec. Survived by selling black market cigarettes, then clothes, was locked up several times. This spacious restaurant has only been around since 2010. He had a smaller joint on the same street. Working seven days a week, he leaves the house at 7AM and doesn't return until 10PM. He's off only on holidays or when he's sick. Is married to his second Polish wife, has six kids altogether, with three grown ones working in Leipzig, Germany. His 20-year-old has a job across the river, since German wages are three times higher than Polish ones, averaging €719 to Germany’s €2,183. Of the two women shown in photo, the one on the right has worked for restaurant owner for nearly 8 years. He never had enough money to fly back to Vietnam before 2010, but now returns annually for a month to see his aging mother, and to take the extended family to the beach. I'm sure he also gives quite a few people money. It's expected. Though he's slightly older than me, he looks younger, so when we met, he kept referring to himself as "younger brother." By a miraculous coincidence, we come from the same block in Saigon, though he got there just after I had left. The man has no desire to retire in Vietnam. "Everyone knows me here. I'm at home here."

"Don't you miss the food? Like a really great bowl of pho?"

"I can make it better myself."

Oh, and the Vietnamese on the wall is a common New Year's greeting. It basically means, "MUCH WEALTH MUCH LUCK."

Email ThisBlogThis!Share to TwitterShare to FacebookShare to Pinterest
Labels: Zgorzelec

Dear Linh Dinh:
I am a Russian and a resident of Moscow. I really liked every piece of your prose I'd read. I hope you'll visit Moscow sometime sooner or later, and I'll be looking forward to your written impressions.
By the way, I know a Vietnamese restaurant here, one of the kind you like to describe (typical of the locality, crowded with common people). I was told it's supervised by a native of Saigon.
If you happen to stop over for a few days and need an informal guide around the city of about your age, you can count on me.
Sincerely yours,
Andrei

I'd love to visit Russia, any part of it, but I won't be able to make it any time soon, I'm afraid. I'm in Germany until the beginning of March, then I must go back to the US. To visit Russia, I'll need to apply for a visa in the US, I think. I do hope to be able to go before too long, though, and we can have a few beers then!

Nice to hear from you, Linh.

I'm not sure that application for a Russian visa in the US is a must (you can check with embassy or consulate). However, here's a real caveat: I heard that visa processing could take more time than you might expect. The only way to speed it up that comes to mind is getting in touch with a high-ranking Russian writer or a writers association willing to support your application as colleagues.
Anyway, I'm sure we'll have a lot of things to discuss over those beers.