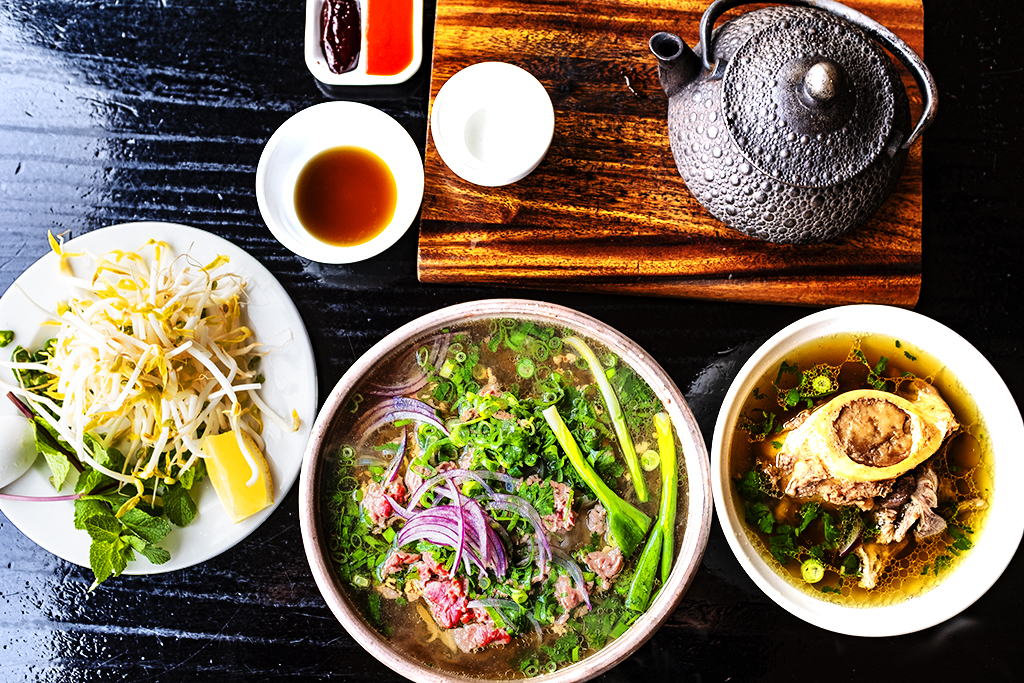 Half a block from my apartment is Saigon Restaurant. Walking in today, I was greeted by a colored man, then served by a black waiter. Looking towards the kitchen, though, I did see a Vietnamese looking man, rolling sushis. Just to make sure, I asked the waiter if the cooks at Saigon were Vietnamese. Yes, he said, and pointed to the sushi chef, who also turned out to be the owner. I went over to introduce myself.

Delighted to meet a fellow Vietnamese, he suggested I order pho, which I already had. He instructed his crew to make it extra special, however, and that's why you see a second bowl here, with fatty broth, brisket and a soup bone, compelete with marrow. With its hoisin sauce, sriracha sauce and bean sprouts, this is pho Saigon style, which I find much better than anything I've had in Hanoi, pho's birthplace.

56-years-old, the owner of Saigon is from Saigon, and has been in South Africa for 24 years. Before that, he was in Germany for eight years, with also a brief spell in New York City. His mother is still in Vietnam, so you can be sure he's sending her money, but he hasn't been back to his native land for more than a decade. Quite frankly, he admitted to me he didn't miss it at all.

One of his two sons went to an English school here, while the other attended a German one. South African born, they can hardly speak Vietnamese.

Before Covid, he had a couple of Vietnamese kitchen employees, but they have gone home, so South Africans had to replace them. Business is not even half of what it was before the pandemic. He thinks this dire situation will last another three or four years.