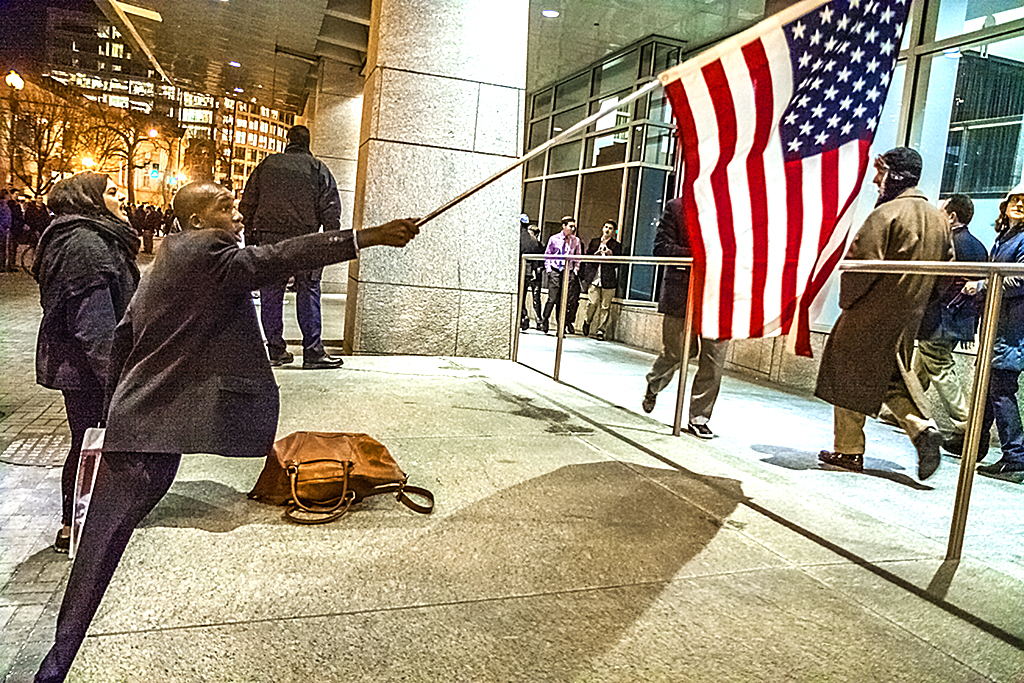 Outside Convention Center just after Netanyahu's speech on 3/2/15. Flag is aimed at AIPAC members. Cop in background finally told man to stop waving his flag like that.

As you can see, there was a separation between protesters and AIPAC members. To take photos of the AIPAC folks, I had to stand as far away from them as that man with the flag.

[My main computer is still not functioning, so this was processed from my laptop and using GIMP, instead of PhotoShop. The image is not exactly how I want it, but I just need to get moving again.]

Linh: Were ours a just, intelligent & truth-seeking country, this photograph would be Pulitzer Prize class.

The protestor, depicted in the picture, seems to symbolically use an American flag to poke at and use as an expression against AIPAC power.

Only the arrogant would not feel sympathy for the well-dressed black man's intentions, but there's political danger & deceit at work here too.

The American flag is no longer the Old Glory made by Betsy Ross, and the flag is different than the one northern blacks carried into war against the Confederacy.

No doubt the man (in the picture) meant well by indulging flag poke at AIPAC speech attendees. However, on second thought, I suggest that he politically expressed himself in the preferred reactionary policies which "Across the Aisle" Neoconservatives feast upon, and USING "Old Glory" as big stick, poke tenderized Americans into fear, docility, loss of Civil Rights, and war.