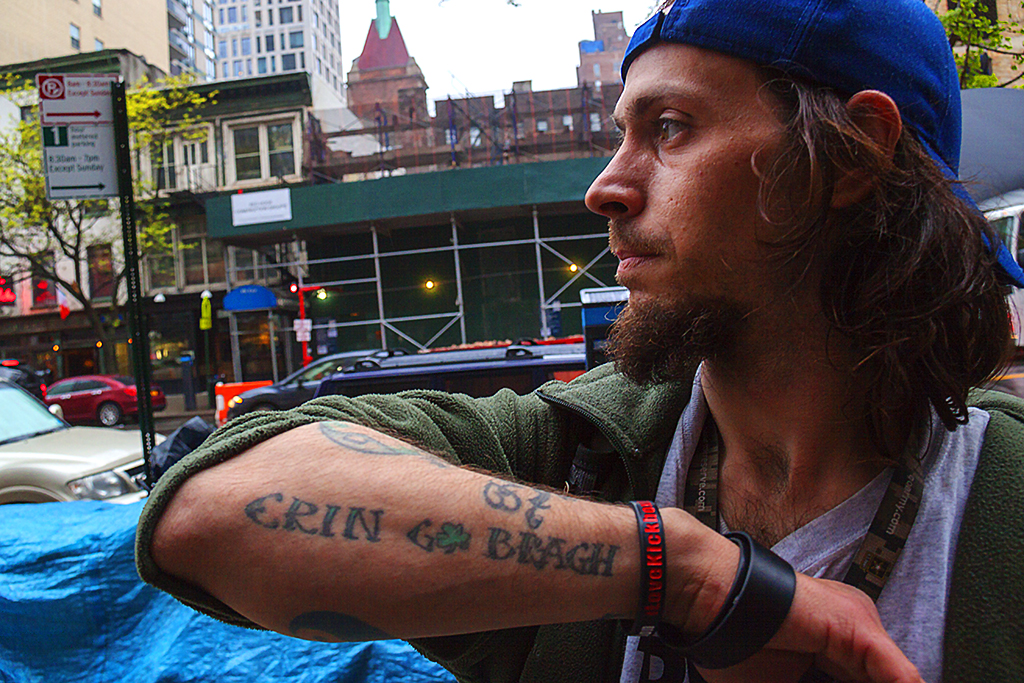 Kips Bay. Thirty-three-year-old Thomas Decoteau spent five years in jail for selling drugs, nearly seven years in the Army, which sent him to Iraq and Afghanistan, then nearly four years with the Big Apple Circus. He has dealt drugs since he was a teenager.

Thomas has an Argentinian wife who's back in Argentina. He's the father of two kids, but one died at birth. He has 100 acres in Maine which he won't sell because "it's sacred."

On the streets, Thomas has an older friend whom he calls his "mom." She is always picked up by cops at Grand Central and dumped at Bellevue Hospital. Once they spent all night in the same hospital bed at Bellevue. She has come on to him once, but Thomas resisted, "because I don't want it to be like that. I see her as my mom."

Thomas was on his way to see his "mom" at Bellevue when I ran into him. Walking down Lexington, Thomas was ranting and screaming but when he saw me taking a photo, he said, "That's beautiful," in a normal voice. After I talked to him, Thomas calmed down, "You just saved my life."

"Bullshit, man, I didn't do anything."

"If you didn't talk to me, I'd probably be picked up by the cops for screaming on the street."

"Maybe I'd have walked in front of a car," and Thomas started to walk onto the street into traffic. I yanked him back. "See? You just saved me again!"

PBS did a six-part mini series on the Big Apple Circus. Thomas appears in the first episode.

Thanks Linh. High functioning and completely normal man right there from what I can see. Might need his self esteem nurtured and protected a bit. I like 'Noam the straying's intuitive take: "Those who have no time or mental space to work through their problems"

Thomas said he was paid $275 a week at Big Apple Circus, with free food and rent, and the food was great, too. The ratio of men to women were 2 to 1 in the 150 member troupe, so there was a lot of tension and jealousy, Thomas said, and he was one of the few who had a girlfriend. Thomas likes his whiskey and his vodka, on top of his drugs. He was so enraged marching down the sidewalk, I could hear him from half a block away. Once we started talking, though, he was perfectly lucid. He even rapped a couple of poems for me.