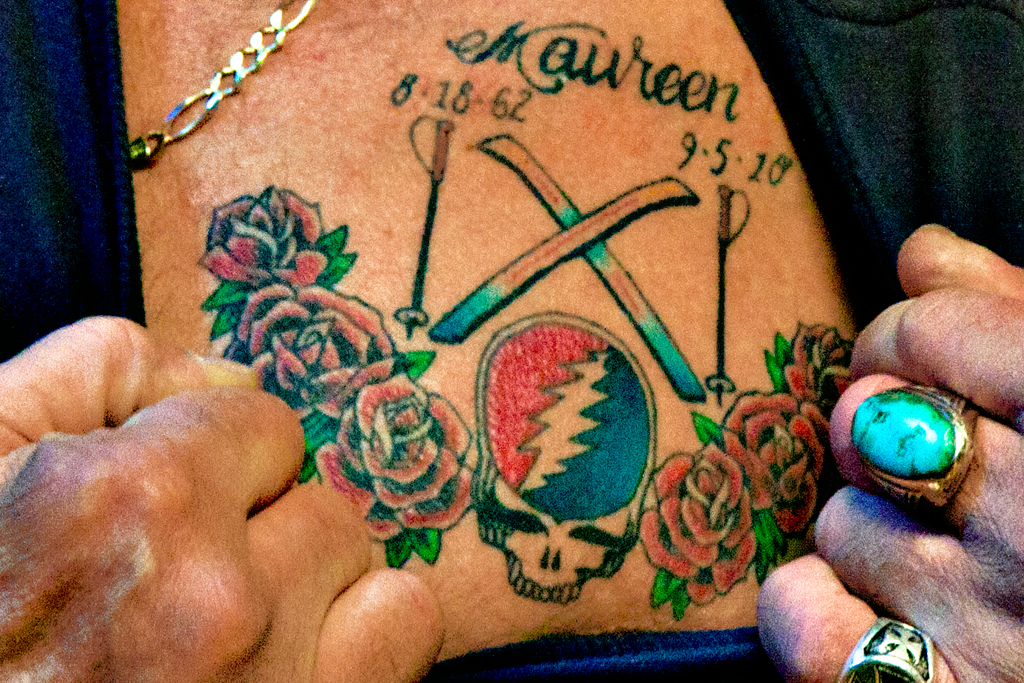 Before he became belligerent without provocation, this man told me about his late wife, how she died, where he lived, and the fact that he had been flagged from his neighborhood bar, and had been in jail for three years. Here he was showing me his tattoo, and holding very still so I could take a good shot of it. Less than an hour later, however, he was snapping at me for talking too loudly and "not listening," though I had done almost nothing but listen, since my one aim was to hear stories, his or whosever, and not tell my own. At this point, he was the only one to show antagonism, for everyone else had been extremely friendly. They talked my ears off, and one even recited a poem to me. A man wanted me to take a photo of him kissing the bartender, then gave me an email so I could send him the image. I was laughing and laughing with people until this crank became weird, but then he calmed down, and I thought we were cool. When I stepped out of Johnnie's for about 15 minutes, however, he apparently told everyone I was a cop, so I was completely unprepared to come back to a different reception, and so I picked up my bag and slowly walked out, but not before I said goodbye to him even, "I don't know what's happening, man, but it was good talking to you." I looked him in the eyes, smiled and shook his hand, but then he chased after me, and this was no one-on-one confrontation, for it almost never happens that way, for in real life and not on screen, most men are cowards. So here I was confronted by three guys outside the bar, and when this gent grabbed my left forearm, I removed his hand quite forcefully, for what choice did I have? I took out my phone and walked backward into a store whose door happened to be open, and the store owner, bless his soul, quickly instructed a male employee to not let my harassers in. When one tried to enter, the employee chased him out and locked the door. Within two minutes, two cops showed up, and one asked me, "What do you want to do?"

"I just want to walk to the train station and get the hell out of Norristown! If you have questions, just ask the people in this store. They saw everything from beginning to end." And so I walked away as the cops watched my back. Just in case you think my experience a gross abberation, two September shootings occured five hours apart within three blocks of where I was standing, and this I've only found out from the folks inside Johnnie's. Since no flesh was punctured in these shootings, just cars, they never made the news. Charming place, this Norristown.

Email ThisBlogThis!Share to TwitterShare to FacebookShare to Pinterest
Labels: Norristown

drunks can be like wild beasts in the zoo -- they may seem tame and docile, but when they sense vulnerability that instinct to kill comes out. hell, a man doesn't even need to be drunk if he's desperate or down-and-out enough, and will take your life for a few dollars. while we think of this as typical of some uncivilized society, today's USA has a finely cultivated culture of senseless and random violence... so stay safe, man. you don't the doctor bills.

Personally, I am wary of bars when I visit a new town. I still travel, but bars can be sketchy and especially in the KFEA, or USA. I don't even like visiting certain restaurants and cafes. A few of those places can attract the wrong crowd - and obviously, you encountered one of those joints.

In the actual KFEA, there are few spaces now open for the ex-felons, low life indigents and trailer trash. Most inner city public libraries are filled with not just reading patrons, but the homeless and the down and out - and especially on cold days. At least in the public library the cops don't harass them or put them in prison. Now many urban public libraries have anxious security buffoons, and this is also the main reason why some urban politicians want to close down the local libraries.

Bars in the KFEA wasteland are even worse because bars in our land don't care about any community ambiance. They only want our money, so you got that nasty experience with the asshole owner who got pissed over you taking photos inside the bar. After a hard night drinking in a bar, I have even lost close to 100$! I don't make enough money to waste it all on booze. I never give the bar my bank-credit card, I have had too many bad experiences in the past with that one. And we still have to tip those bastards! Most Amerikan bars just have alcohol, boredom and 24 hour TV media propaganda - a deadly mix for the emotional hurting.

But besides hard Evangelical Christian churches, or what I call them, religious hucksters and fascist recruiters, the bars are the only spaces left for the lumpen proletariat, or as we call them in the US, the trailer trash to congregate. Inside both the church and the bar, the low life patrons can simply let loose.

And when those people let loose under alcohol, they explode with all of that institutional violence that they have experienced in their lives of unending suffering: general poverty that causes broken families, rat infested buildings, no social safety nets, prison-jail time, cop beatings, day to day bullying, periods of homelessness and chronic unemployment.

Where I live out west, I rarely go out drinking even though I have been living in this small city for a few years. There are too many nasty drunks, guys that can't hold their booze, and the most dangerous element, the angry and frustrated men that are looking to literally 'go out with a bang.' Now most people in town drink inside their own homes - and it is a lot more safer and cheaper. I would rather die fighting for my dignity and freedom.

I am super wary before entering inside a new bar-club in a new town when I am out alone. I look for certain signals by glancing quickly through the windows. This has to be done prudently because certain bars are nervous for danger outside. The signs I look for are the lonely-looking, both men and women, drinking alone, gangs of rough guys drinking in packs: cholos, rednecks, wiseguys, bikers, cowboys or super jocks, or if I notice that the bartenders' or owner's friends and buddies are the only ones sitting at the bar.

If the dark bar, resto or cafe has no windows, then I won't go in alone to explore. Those days are definitely over. When I was young, it was fun - but now? I also avoid bars and clubs that have gorilla-door guys hanging out front. This means that the bar-club has had trouble before. One never knows these days.

Also, one has to take into account the whole DUI thing. Donut cops now hang out around bars in order to swoop down and destroy the lives of the unwary - and I just don't mean at night anymore.

Sorry you had that nasty experience inside the dive in Norristown. But at least you are truly experiencing the actual rot and the leftovers from the Amerikan nightmare of institutionalized violence.

Since "the bars are the only spaces left for the lumpen proletariat," in your words, I can't help but go into them.

When inside a business, I don't use my camera if people object, but it's not like I have a choice, really. Sometimes I ask for permission. Sometimes I take photos of people I was already engaged with. Sometimes they ask to have their pictures taken. Sometimes, though, I do sneak.

I want to see your photos, but won't join Yahoo to do it, any other options?

Have you heard of Gavin de Becker's book, "The Gift of Fear?" He describes how most women, before they are raped, have an instinct that something bad is going to happen to them, but dismiss it as paranoia, or reason away their suspicions.

I guess you could chalk it up to the booze, or the nature of your work (soliciting stories from a variety of characters), but didn't you see it coming with Don, even a little?

Since I go into countless places where I don't quite belong, and since I'm often drinking when I'm out and yakking with people, you can say I'm not a very guarded person. Honestly, I did not think Don would turn nasty on me, and I believed that partly because I thought I had made some friends in that bar, and also because I had approached Don before I left the bar momentarily with the other guy. I thought Don and I were cool.