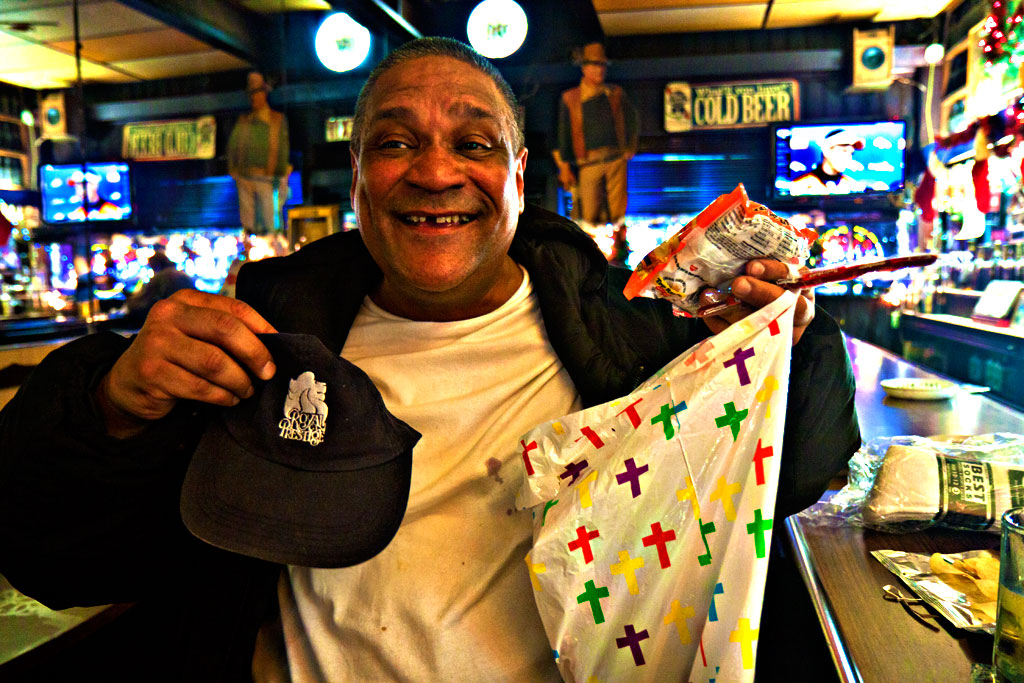 Fifty-seven-years-old, Pedro works for Royal Prestige, and that's why he's holding up his cap along with the church group's Christmas gifts. The Best Socks on the bar he just bought from an itinerant seller.

"It's like this. You have chihuahuas, greyhounds, german shepherds and bulldogs, but we're all dogs, you know what I mean, so we've got to stick together!"

Then, "I love everybody, man, and it has to be unconditional love. I hold no grudge against nobody."


When I told Pedro I was 51, he shouted, "Congratulations!" Overhearing us, Bob the bartender jumped in, "You're congratulating him for being 51?!"

"Yeah, because not everybody makes it that far!"

"So congratulations to you too!" Pedro said, then to me, "The other day, I just said hello to these young guys standing on the street, and they looked at me like they wanted to kill me! One of them said, 'What are you looking at?!' I just kept my head down and walked away. Around here, they might just shoot you over nothing!"

It was Christmas Eve in Jack's, and the mood was reasonably festive. When a white woman in her late 60's saw a Hispanic man she knew, she said, "What is it, what is it, feliz Navidad!"

"Merry Christmas to you too," he responded.

"Are you married, Pedro?" I asked.

"Yes, but she passed away. I live alone."