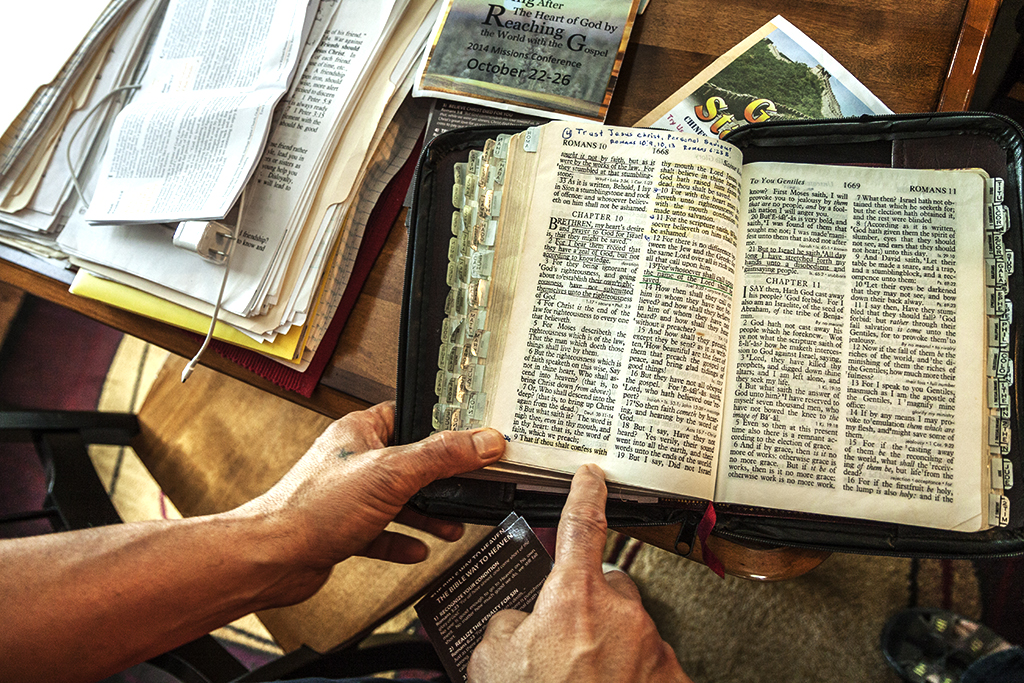 Fifty-six-year-old Jose in his dining room pointing to his bible. Jose belongs to the Scranton Revival Baptist Church.

Jose was born in Brooklyn. When he was seven, his mom deserted the family, and a few months later, his father tried to commit suicide by drinking, in front of him, Coke mixed with rat poison. Jose started drinking alcohol at nine, did drugs by eleven, grew up in 18 foster homes and was often in jail for drugs. At 18, Jose married a woman he had known since he was eight and she was nine. They're still together. In his early 30's, Jose became a born again Christian.

While working as a hospital security guard, Jose injured his spine while trying to hold down a psychiatric patient, so he's in constant pain now. Hoping to partially cure himself, Jose makes his own juice mix and drinks many glasses a day.

After Jose's daughter married a man in the Scranton area, Jose followed her and now lives within sight of her house. He's extremely happy to be out of NYC. Jose only spent about $150,000 for his land and spacious, custom-made house.

A very warm man, Jose welcomed Chuck Orloski and me into his home and offered to make us hot dogs and burgers.

Jose's church is the center of his life. He knocks on doors and visits homes. Last month, though, Jose caught bed bugs on a visit and brought these maddening pests home.

As an adult, Jose found his mother and visited her in Florida. He has no resentment towards her.

Email ThisBlogThis!Share to TwitterShare to FacebookShare to Pinterest
Labels: Duryea