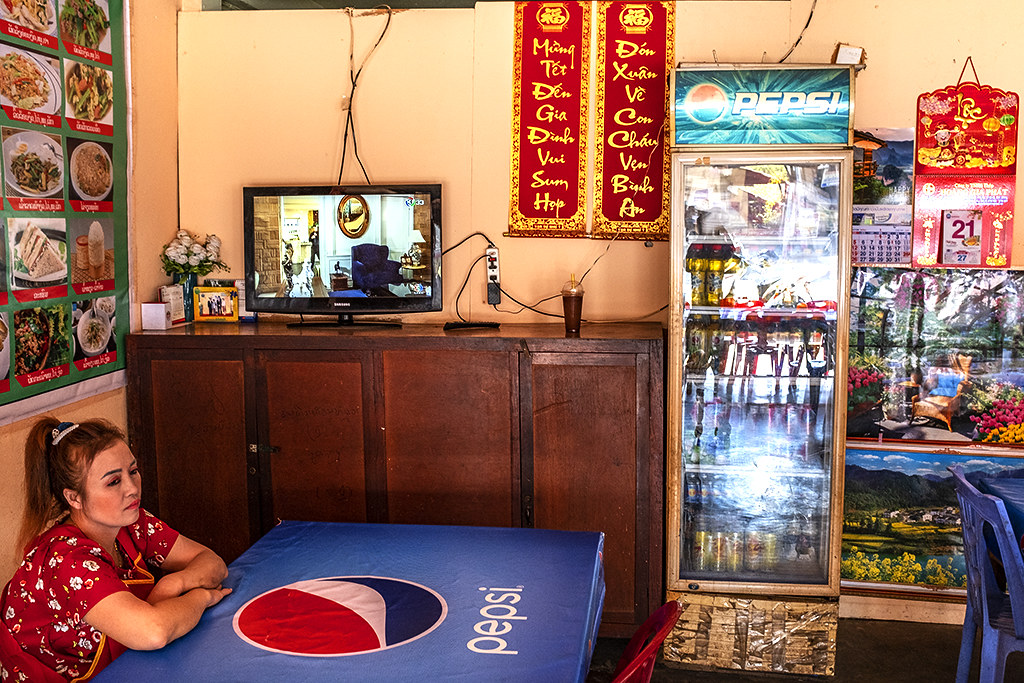 Phonxay Restaurant. Seeing Vietnamese on the wall, I asked an old lady here if she was Vietnamese, and she was, so we talked for a while. Seventy-one-years-old, she arrived here in 1955. Nineteen Vietnamese families were recruited here by the Chinese Communists to clear this area and settle here. I didn't the Chinese were here, and who knows if it's recorded anywhere, but history has many hidden footnotes and even chapters. Some of the Vietnamese died soon after arrival, from various sickness spawn from the jungle, and "there were so few doctors, and almost no medicines," she said.

“We’re the only one! Most left for Vientiane, or even overseas. They dropped a lot of bombs here.”

“Were you here during that entire time?”

"Yes, I was. When you hear them coming, you have to jump into a hole. We had holes dug all over."

"How long would it last, each bombing?"

"So how long would it last altogether, sister?"

"On the worst day, it went from 6 in the morning until 7 at night."

"So you just had to stay in the hole all day long?"

"Yes. When we came out, all the houses were gone," and she swept her arm to indicate the entire street. "All gone, so we had to go into the woods to dig up cassavas to ead. We also made soup with wild flowers."

Her Lao husband died 22 years ago. She had eight children, but one daughter died of an illness. One son is a doctor in Vientiane, "He works at that hospital with 150 beds, you kbow," as if I would know!
Her doctor son is married to a Lao wife, who's also a doctor. To make extra money, they rented a space and operated a pharmacy, which they ran after their shifts. Now, they have a house in Vientian, and even a car, "They paid it by installments. It took them five years."

When I told her this was my first trip to Laos, and I was just traveling, she said, "That's good. It's good to see things. We're like a lamp. Today, it's still lit, but tomorrow, it's out, and that's it!"

She's from Ha Tay, before it was absorbed into Hanoi.

"How many times have you been back to Vietnam, sister?"

"And how long did you stay each time?"

"A week. I visited relatives, visited the Lake of the Returned Sword, ate this and that."

"But they don't do the banh cuon right. The make the skin all wrong!"

"Lao pho is good, and we make it right here!"

She also has a son overseas. "He studied in Malaysia and India. He's in India right now."

"IT. He's very smart. When he was still here, he told me, 'I must learn English. If you know English, you can do everything.' It took him three years."

"That's very good. So the schools here are not bad?"

"No. He learnt English right near here."

On another visit, she told me that this son had actually been to 45 countries, "When he was small, he didn't go out, he only studied, so everybody thought he was just a nerd. He never smoked or drank alcohol, but now he's traveling everywhere!"

Vietnam during the Japanese occupation of World War II suffered up to two million deads, from famine. To stave off starvation, her parents sold two of their children, a 7-year-old son and a 9-month-old girl, to rich but childless families.

"My parents missed my brother so much, they kept coming by his new family to visit him, until they told my parents to stop it! Fifty years later, in 2004, we were reunited. My brother Dai remembered that his ancestral village was called Làng Tre [The Bamboo Village], so that's how he was able to find our relatives."

"There was just that one meeting?"

"Yes, my mother cried so much."

"And has he come to visit you in Laos?"

"No, but he has visited a brother in Vientiane, several times."

As for the nine-month-old, she was lost forever.