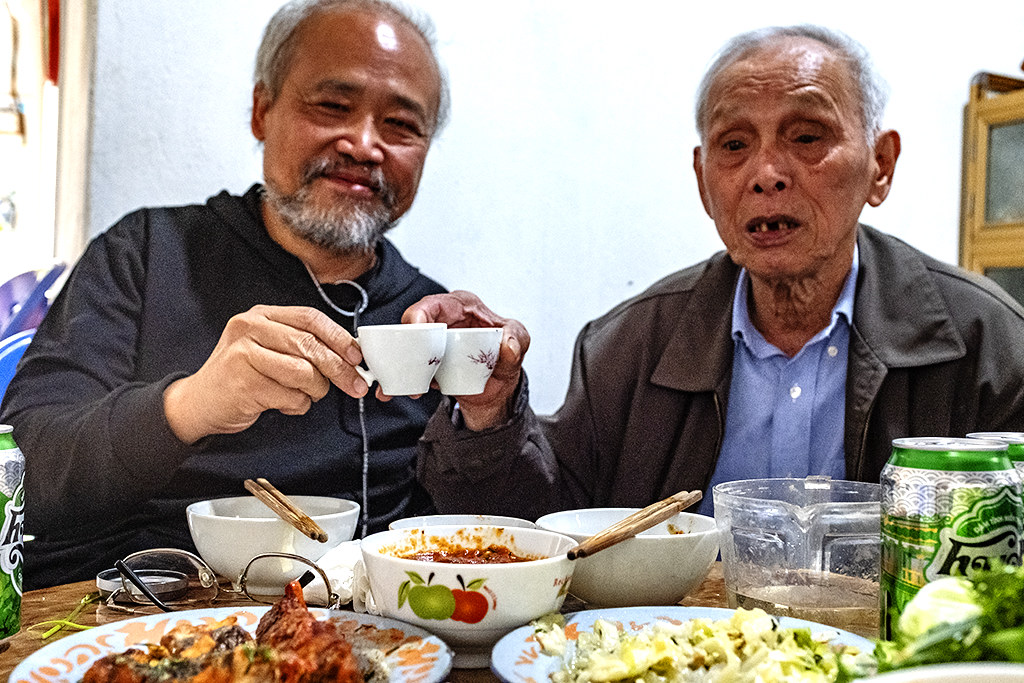 Lunch with 90-year-old Ly Quang Vinh, one of only three surviving Battle of Dien Bien Phu veterans in the area. One is bedridden. The odds of me meeting Mr. Vinh is zero, but things like this happen to me with uncanny regularity when I travel. I mean, Mr. Vinh is not even in Dien Bien Phu, but Thanh Luong, a nearby village I had never heard of, until I stumbled onto it.

Born in Lang Son, 370 miles away, Mr. Vinh joined a Viet Minh youth organization at 15, and was in its army by 20, where he would stay for a decade.

At the Battle of Dien Bien Phu, he was one of the first to storm onto Hill A1. With another soldier, he took 30 prisoners, "Twenty seven of them were Vietnamese. I said to them, 'You can give up and receive clemency, or we can just kill you.' Only three guys were French." This was at the very end of the 56 day siege, and the French garrison was already defeated.

Most people don't realize that 33% of those fighting on the French side were Vietnamese, Cambodians or other natives of Indochina.

His future wife also served at the Battle of Dien Bien Phu, but not as a combatant.

On a wall of Mr. Vinh's house, there's a certificate that congratulates him for being a member of the Communist Party for 60 years. He met Ho Chi Minh twice, in Phu Tho, and Vo Nguyen Giap also twice, right here in Dien Bien Phu, "But we were told beforehand to not shake the general's hand."

I started out by calling him "cụ," a term for old people, but towards the end, he insisted on me calling him "dad," so he could call me "son."

Each day, he drinks his moonshine three times, starting with breakfast. Many Vietnamese men are drinkers, but the rural ones are the worst.

Mr. Vinh didn't want to let me leave, but insisted I take a siesta at his house. Managing to get away, I said in parting, "If I should come back here in two, five or even ten years, dad, we can meet again!"

Knowing my hotel was nearly three miles away, Mr. Vinh wanted to call a taxi, but I said, "If you could walk all the way here from Lai Chau [125 miles away, to fight in Dien Bien Phu], I can walk three miles!"