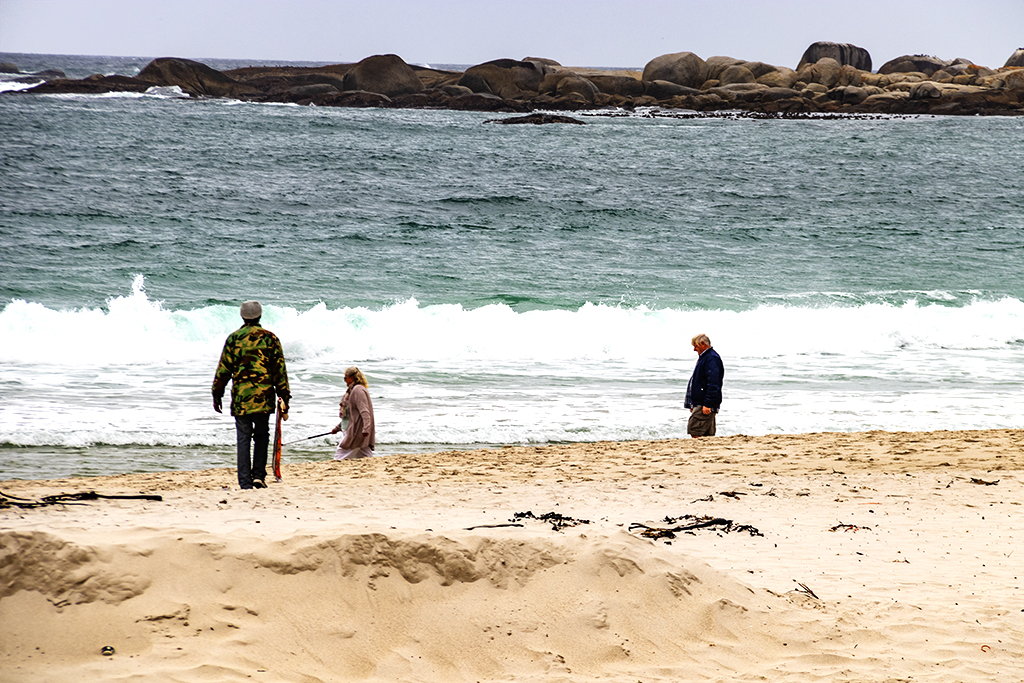 Camps Bay. That's William from Malawi. Each day, he takes a taxi from his distant township to Camps Bay, where he tries to sell his paintings for $20 each. After talking to William yesterday, I thought about hiring him to show me his township, but I didn't get around to making this proposal. Although it was 61 degrees Fareinheit, it felt very cold, due to the fierce winds, so I hopped onto a bus for Hout Bay. I'll look for William soon.

I've just decided to no longer send articles to Unz. The attacks against me there have only increased recently, and after my last, one reader wished I had been mugged, while another lamented that I hadn't been killed as a child refugee. It's beyond absurd that I should bust my ass and spend what little money I have to entertain such a growing list of belligerent morons, so no more Unz. From now on, all my articles will only be found here, and if that reduces my readership by 99%, so be it.

Hear hear Linh. The toxicity of that crew is unbelievable and unbearable. I couldn’t wade through all the muck and slime in that comment section. It seems that site is declining in general, although I only link to your articles through this site because it’s easier to read them on my phone, which is all I have st the moment. Keep writing por favor. The loyal will keep reading. Another unrelated thing: I hope you land in a better place than SA. It sounds pretty grim there. All best to you and nephew Suki SS well. That SS isn’t supposed to be there.

Hi Linh, The comments are sick and posted by idiots from who knows where! It is sickening for these creeps to comment as they do on your well written articles. It must be depressing to read after the effort and talent to write as you do. I recall some of the stupid and insulting comments when you wrote my article before. You think, What the fuck planet are these idiots from. Are you planning on still posting on other web sites? Anyway, good luck and safe travels, hope to see you later this year, Tom

Linh, Right On! And Write On! Philly Joe

I will continue to post sketches and articles here, and of course, post lots of photos regularly.

To not have to bother with such a hostile and idiotic readership will give me more clarity actually.

P.S. My articles won't generally be at any other websites, since I have no reliable access to them anyway. Only here, basically, is where you'll find me, and that's enough.

Always appreciate your writing and photos and usually read it here anyway. When I read articles at Unz I avoid the steerage section below the articles where the filth resides.

Keep up the good work. People seem to be almost demonically possessed these days! Your friends in Sacramento

I’m a longtime reader (and admirer) who has already bookmarked this site (Plus your photo’s capture the ambiance of the locations).

While I can certainly understand not putting up with a lot of the idiot comments on Unz I’d hate to think bad people successfully drove you away. You can’t fault Ron Unz for the comments.

There are a lot of bitter retirees with too much time on their hands and too large of a nasty streak within them commenting over at The Unz Review. I understand your leaving and am grateful that you gave us a heads up along with the link to your blog. I'll be following you as long as you keep on writing.

Please be careful in SA, especially alone, in secluded places and at night. As you well know, all it takes is one horrendous encounter to end all that you are and all that you'll ever be. Obviously, you're streetwise - just don't push your luck.

Your leaving The Unz Review is their loss.

All the best, I wish you well.

Your postings here are good enough for me. Screw the rest. To the top amigo.

Why not have Ron Unz disable comments as he has done for Paul Craig Roberts? Unz himself has noted that of all those who read his Review, only a handful ever comment even once. Those that comment regularly are a tiny minority. So you shouldn't judge your readership by them.
I do know Peter Frost stopped publishing his blog posts at Unz because of the comments he was getting, so you won't be the first who gave up on Unz's site because of the comments.

Unz wouldn't allow me to close or even moderate comments.

What kind of a website allows its featured writer to be called a gook?

Steve Sailer has been the biggest attraction at Unz since the beginning, and now it also has Andrew Anglin. Those two alone attract thousands of belligerent white racists who can't stand just seeing my name at Unz.

Unz benefitted by just having me there, because it allowed him to claim that his website wasn't just a white-only club, with many of them bitter racists. Yes, Michelle Malkin is also there, but she's rarely featured.

These deranged white racists are also enraged that I have anything nice to say about South Africa. To them, it has to be a black created hell where all whites are being raped, killed or being driven out. When I point out that many South African whites actually live in million dollar homes, with blacks serving them, these non-traveling American white racists go berserk. Of course, I also can't say anything nice about any black. Niggers, subhumans or simians are words littered all over Unz.

i always access your words here though i see them in many other places beyond unz. will continue to come here though its hard to see your income reduced by attacks by fools. having a long history of letters to the editor here, i countered nasty replies by counterattacks with letters presenting evidence they couldn't successfully respond to so they eventually wandered off. would contribute but my ss check barely covers stuff now let alone with what the criminals in charge are sending our way. good luck and i will come here as long as you post.

i completely agree about your comment on sailer and anglin. i saw your recent quote by anglin--what a nasty dude. i've often thought the same of sailer, and very rarely look at his stuff. i think kevin mcdonald is a decent guy, paul craig roberts too, but at least half the time i can't bear fred reed, and unz himself strikes me as extremely arrogant and lacking in common sense. his recent rants about anti-vaxxers disgusted me. good riddance to that crappy site!
like some others here above, i am concerned for your safety in south africa.
best wishes,

E. Michael Jones and Laurent Guyenot are two of our top thinkers. Although Guyenot is not an Unz columnist, he appears there fairly regularly. His essays are long and always eye opening. Gilad Atzmon is very good also.

Fred Reed can be an excellent writer, especially when he discusses China or creationism, but his dismissal of concerns about the official 9/11 narrative is a huge strike against him, as is his mockery of the obvious fact that powerful Jews, and Jewish thinking in general, has had an evil effect on the USA and the world.

After I said enough of Unz, someone pointed out that the Saker and Mike Whitney may have just left also. The Saker because of the many belligerently stupid commenters, and Whitney because, I assume, of Unz' glib pro vaccine stance, and his weird and weak defense of all the tyrannical diktats to enforce a jab that, at the very least, fattens Big Pharma, much of it owned by Jews.

Paul Craig Roberts has repeatedly summed up, very succinctly, that the fake vaccines themselves are causing the increased spread of Covid, including the "Delta variant," that they provide no immunization, thus no health benefits, but are responsible for a long list of health damages, including death, and, this is most important, that they may be designed to actually kill people, though not all who are vaccinated.

Though Unz oddly refuses to see all this, at least he has featured one of Roberts' anti-vaccine articles, with the rest easily located at Unz.

"What kind of a website allows its featured writer to be called a gook?"

I was shocked by that. I've always looked forward to reading your travelogues. You made the best decision.

A great decision! The white racist knuckle-draggers at Unz did not appreciate the subtlety, humanism, insight and poetry in your writing anyway, which to me are the biggest draws of your writing.

I wrote to Kevin Barrett, "It's sad that a leading dissident website is swarming with racist assholes. Hostile Jews and other enemies of the USA can simply point to Unz Review and say, 'The people who hate us are the types you find at Unz Review, an all-white club of raging racist assholes! Just read their comments! They can call one of their columnists "a little Gook" and get away with it!!!'

"Jews encourage blacks to behave horribly. Whether Ron intends it that way or not, Unz Review is doing the same with whites."

After my next article is up, Kevin will interview me to discuss these issues.

Although only a casual visitor and whether I agree or disagree with your views, your honesty shines through your photo's and writing. I appreciate the time you take to share your discoveries with us. God bless.

Thanks to all who have left well-intentioned comments. As individuals, obviously we'll have disagreements, but as long as the discussions are civil, we can help each other clarify our thinking.